Losing weight is one of the hardest things a person can do. The work is tough, and results are slow.

It is a war of attrition that can only be won with pure motivation and steel discipline. But, like many things, it can be a lot easier as a team. Here are some couples who have shown us that when it comes to weight, love really can conquer all. 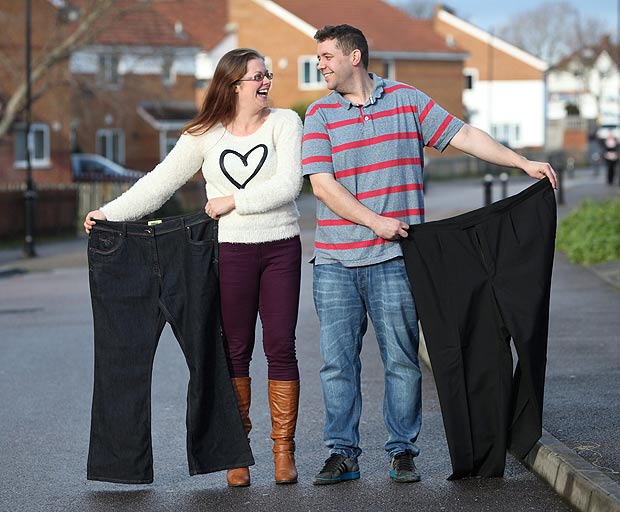 When they first got engaged, this couple weighed more than 500 lbs combined and refused to marry until they had both lost weight. Kim didn’t want to look back on her wedding photos and hate them. “I would have hated having my photos taken on my wedding day. In fact, if I was the same size, we would not be getting married,” says Kim, who weighed 280 lbs at the time. Every evening, Kim and Lee would polish off multiple pizzas, garlic bread, ice cream, chocolate bars and packets of crisps. All accompanied by beer and wine. Lee, who weighed 350 lbs, even had to order his 56-inch waist trousers online because no stores stocked his size.

The penny dropped when Kim saw a photo of her with her newborn baby. She didn’t want to show anyone the photos because they were so “awful”. Lee’s weight, meanwhile, was more than the maximum setting on their Nintendo Wii and the couple realized they had to do something. They started by joining a slimming club and three years later, on their wedding day, they had shed a combined 196 lbs between them; more than a third of their body weight. “There is a lot more laughter in our life now, we enjoy life so much more. We are like big kids,” says Lee. 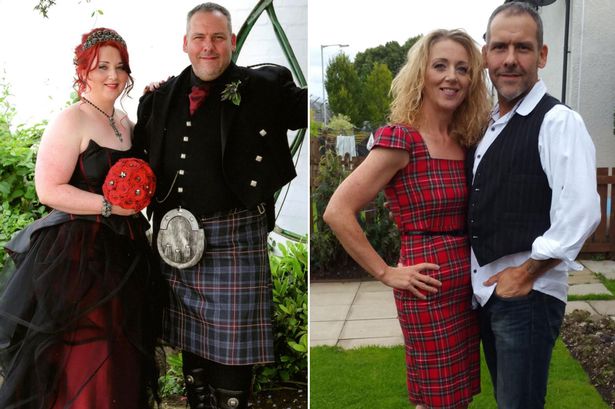 When Mark met Louise in 2010, he was the thinnest he had ever been in his adult life. But as their relationship grew, so did our bodies. “We loved to treat ourselves to junk food and we definitely had over-active ‘fork-hands’,” Mark said. Louise had always been an emotional eater and was a size 18 by age 18. To make matters worse, she was a feeder. ”Whenever my family liked a recipe I’d cook it until they were sick of it – homemade cheesecakes, cupcakes, double sized portions of lasagna.” Mark jokes, “She loves to cook, and I loved to sample it all!”

However, after a motor accident caused by a coughing fit, the DVLA revoked Mark’s driving license. And, in order to appeal, he would have to reduce his 43 BMI down to 30. Mark discovered a weight loss plan called Cambridge Weight Plan, and the pair decided to try it out. “I am so glad we did,” enthuses Louise. “It worked like magic…For me, it wasn’t just about eliminating certain foods but about learning what my triggers were that made me overweight in the first place.”

As for Mark, he lost 126 lbs and got his license back, but the rewards have been transcendent: “My wife says I’m not grumpy anymore, and I’ve definitely noticed that too! Our family life and our love life have improved no end!” The 2015/16 Couple Of The Year lost a combined 207 lbs in just 7 and 6 months, and now want to become Cambridge Consultants themselves. 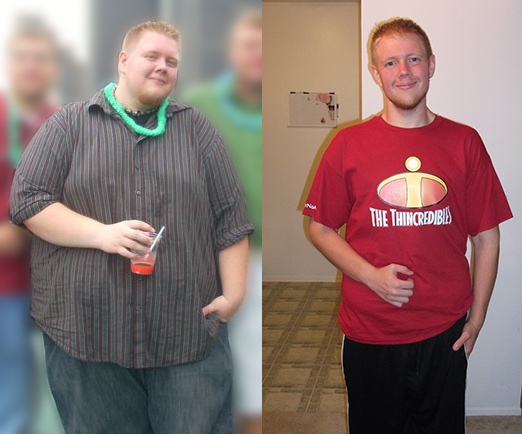 When John and Lisa first met, they weighted 280 and 420 lbs. John says he was at his all-time heaviest. “I was so big that the scale would error out on me instead of giving a measurement,” While all his friends were doing well, he was stuck. “In my friend circles, I was known as ‘big John’ or ‘the Couch’. It’s amazing the things you’ll put up with when your self-esteem is so low, and you just want to be accepted.” He realized that he was on his way to an early, unhappy grave and decided to begin losing weight.

Lisa, meanwhile, explained she “ballooned” as soon as puberty hit, gaining 10lbs to 15lbs every year. “I looked around and saw that most of my family was heavy, so I just accepted that I was going to be fat forever.” Never being able to shop with her friends, however, was “heartbreaking” and things got so bad, one doctor indicated there were signs of pre-diabetes.

Inspired by John’s ongoing lifestyle change, she followed suit, and in just a few years John had lost 220lbs, and Lisa had shed 110lbs. “We are so lucky that we found each other and that we were able to make these changes together,” she says. The two are now trying to crowdfund excess skin removal surgery on gofundme.com and have raised $2,115 of their $8,000 goal. 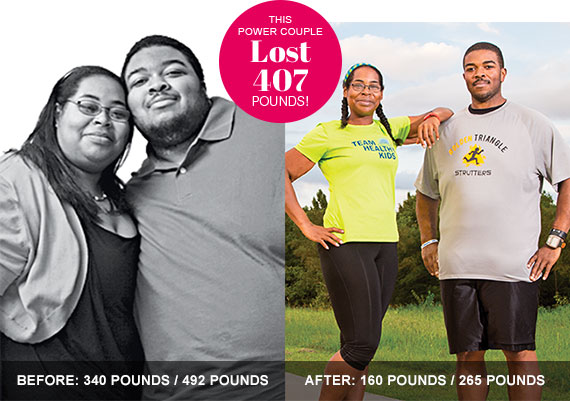 A year into their marriage, Angela and Willie decided to lose weight. “Why you might ask? Well you see we were extremely obese,” writes Angela, on her blog, webeatfat.com. “Plus, for the first time I was actually happy with everything in my life, besides my weight, and we both needed to be happy about that.”

However, it was not just about losing weight, it was an entire lifestyle shift and a dramatic change in their relationships with food. “I remember the first day I took my husband to the gym with me; he was a little afraid. People do look at you funny when you’re fat, but people must remember – they won’t look at you funny if you’re fat at the gym.”

Working out has grown into a huge part of their life – it is something they enjoy together. “There are some days we don’t feel like going to the gym and we push through. “There are days that our bodies just tell us no way and we don’t go at all.”

One of the hardest things to overcome was the adjustment to her “social agenda”, which largely revolved around food.

While they cut down their red meat drastically, they still eat a lot of chicken and fish. “I was always told that should stay away from potatoes and such, but I would rather work out than not eat potatoes.” Baked, of course. “From time to time we do eat at those places where you shouldn’t, we just do it in moderation, and we definitely don’t go crazy.”

The couple has made a huge transformation, losing a combined 500 lbs – Angela has shrunk from a US size 28 to a size 0, and a 2XL shirt to a medium. She has even gone down two shoe sizes. Willie, meanwhile, has dropped from 492lbs to 192lbs. 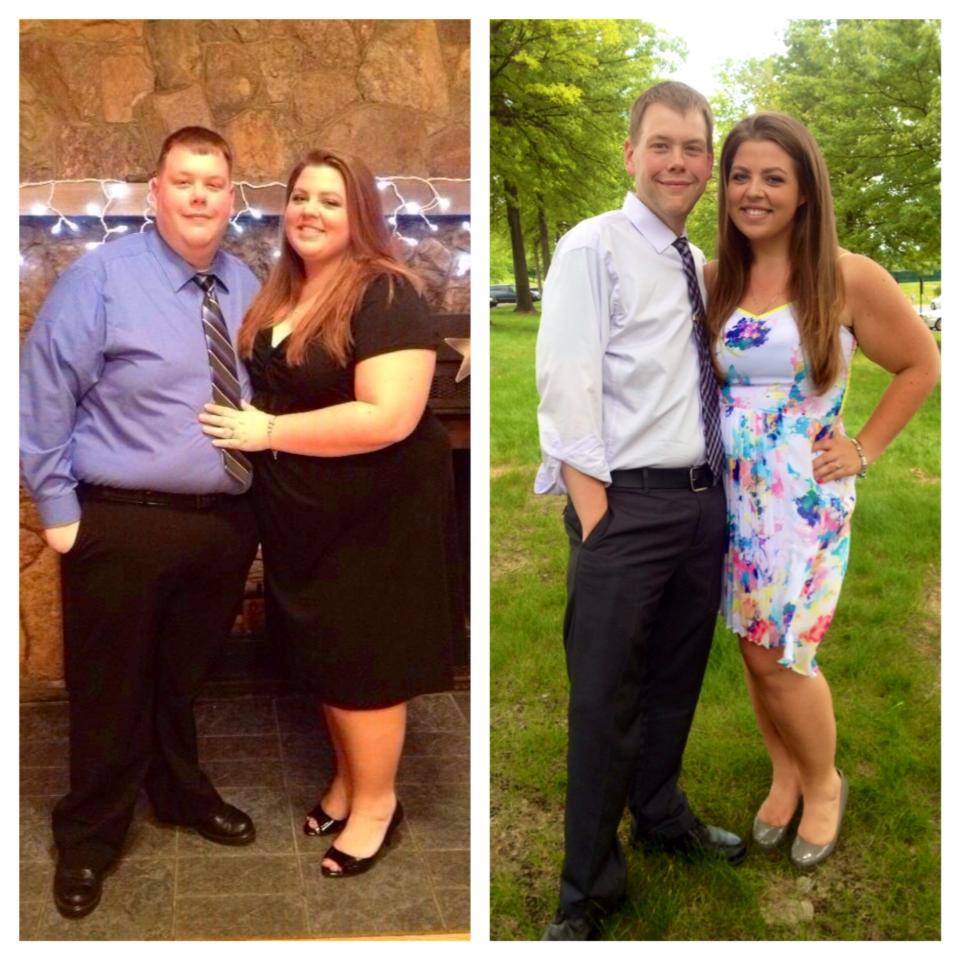 Danny says he had always been overweight. “My family does not have great medical history, and I knew that if I did not change my ways, I would run into many issues down the road.” His father died of cancer, unable to receive the treatment needed because of heart issues. Kalean’s weight, meanwhile, spun out of control at college – mainly due to living a carefree life of excess.

For Danny and Kalean, the eureka moment was realizing they could not reach their third floor apartment without stopping for a break. “We knew we had to change if we wanted to live a long and happy life,” she says, which prompted them to embark on their own fitness and weight loss journey. After making a New Year’s resolution, they started hitting the gym three times a week and “never looked back”. While the changes were small, they eventually snowballed into big ones.

The couple also cut out processed foods, switched to whole grains and cut their soda intake. Kalean can now use the elliptical on max resistance for an hour, while Danny can run 5 miles in just under an hour. Danny dropped from 400lbs to 184lbs, while Kalean went from 363lbs to 240lbs. Kalean says: “We supported each other by just encouraging one another. If one of us is having an off day or feel discouraged, the other one just reminds them of how far we have come.”